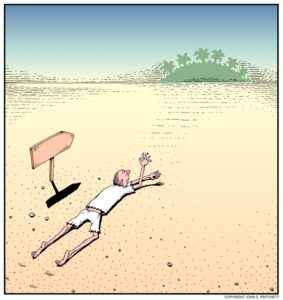 The Coca-cola company decides to start selling Coke in Israel. They sent Harvey, an experienced executive who had successfully launched the popular product in other countries across the globe.

Harvey follows his tried and true plan. He develops a marketing campaign for television. He creates advertising for newspapers and magazines. He puts ads on all the billboards in Israel.

Nothing. Nada. Zip. Israelis are not buying Coke.

“I don’t understand it. When I got sent to Israel to increase our Coca-Cola sales. I was confident that I would be able to succeed even though I couldn’t speak Hebrew.”

“So what did you do to get around the language problem?” his boss asks.

He describes the storyboard he used for the advertising.

“There’s no text. I was able to strongly put across our message using just three high-definition images. These images, when viewed sequentially, clearly told the Coca-Cola story.”

“So what were these three images?” His boss asks.

“Harvey, you missed a key point.” The boss responds.