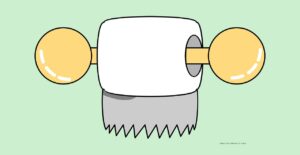 A very proper lady began planning a week’s camping vacation for her and her Baptist Church group. She wrote to a campground for reservations. She wanted to make sure that the campground was fully equipped and modern, but couldn’t bring herself to write the word “toilet” in her letter. So, she decided on the old-fashioned term “Bathroom Commode.” Once written down she still was not comfortable. Finally, she decided on the abbreviation “B.C.” and wrote, “does your campground have its own “B.C.?”

When the campground owner received the letter, he couldn’t figure out what she meant by “B.C.” He showed it to several of the campers, one of whom suggested the lady was obviously referring to a Baptist Church since there was a letterhead on the paper which referred to a Baptist Church.

So, he sent this reply:

The B.C. is located nine miles from the campground in a beautiful grove of trees. I admit it is quite a distance if you are in the habit of going regularly. No doubt you will be pleased to know that it will seat 350 people at one time, and it is open on Tuesday, Thursday, and Sunday of each week. Some folks like to take their lunch and make a day of it. The acoustics are very good, so everyone can hear even the quietest passages.

It may interest you to know that my daughter met her husband there. We are also having a fund-raiser to purchase new seats, as the old ones have holes in them. Unfortunately, my wife is ill and has not been able to attend regularly. It has been a good six months since she last went. It pains her very much not to be able to go more often. As we grow older, it seems to be more of an effort, especially in cold weather.

Perhaps I could accompany you the first time you go, sit with you, and introduce you to all the other folks who will be there.