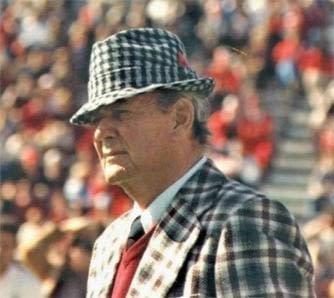 I had just been named the head coach at The University of Alabama and was off in my old car down in South Alabama recruiting a prospect who  was supposed to have been a pretty good player and I was havin’ trouble finding his high school. Getting hungry I spied an old cinder block building with a small sign out front that simply said “Restaurant.”

I pulled up, go in and every head in the place turns to stare at me. Seems I’m the only white ‘fella’ in the place. But the food smelled good so I skip the tables and go up to a cement bar and take a seat. A big ole man in a tee shirt and cap comes over and says, “What would you like?” I told him I needed lunch and what did they have today? He says, “You probably won’t like it here, today we’re having chitlins, collared greens and black eyed peas with cornbread. I’ll bet you don’t even know what chitlins are, do you?”

I looked him square in the eye and said, “I’m from Arkansas, I’ve probably eaten a mile of chitlins in my life. Sounds like I’m in the right place.” They all smiled as he left to serve me up a big plate. When he comes back he says, “You ain’t from around here then?” And I explain I’m the new football coach up in Tuscaloosa at the University and I’m here to find whatever that boy’s name was and he says, yeah I’ve heard of him, he’s supposed to be a pretty good player. And he gives me directions to the school so I can meet him and his coach.

As I’m paying up to leave, I remember my manners and leave a tip, not too big to be flashy, but a good one and he told me lunch was on him,

but I told him for a lunch that good, I felt I should pay. The big man  asked me if I had a photograph or something he could hang up to show I’d been there. I was so new that I didn’t have any yet. It really wasn’t that big a thing back then to be asked for, but I took a napkin and wrote his name and address on it, stuck it in my pocket and told him I’d send him one.

I met the kid I was ‘lookin ‘ for later that afternoon. I don’t  remember the boys name, but do remember I didn’t think much of him after talking with him and his coach. I had wasted a day, or so I thought. >

When I got back to Tuscaloosa late that night, I took that napkin from my shirt pocket and put it under my keys so I wouldn’t forget it.

Heck, back then I was excited that anybody would want a picture of me. > And the next day we found a picture and I wrote on it,  “Thanks for the best lunch I’ve ever had, Paul Bear Bryant.”

Now let’s move on a whole ‘buncha’ years down the road. Now we have black players at Alabama and I’m back down in that part of the country scouting an offensive lineman we sure needed. Well anyway, after I talk with him, he says he’s got a friend going to Auburn and he tells me he’s got his heart set on Auburn like his friend. I leave empty handed and go on to see some others while I’m down there.

Two days later, I’m in my office in Tuscaloosa and the phone rings and it’s this kid who just turned me down, and he says, “Coach Bryant, do you still want me at Alabama?” And I said, “Yes, young man, I sure do.”

And he says, “O.K. I’ll come.” And I say, “Well son, what changed your mind?” And he said, “My grandpa found out that you came down to my high school and offered me a chance to play for you at Alabama and that I said “no” he pitched a fit and told me I wasn’t going nowhere but the University of Alabama, and wasn’t playing for nobody but you. He thinks a lot of you and has ever since y’all met in the late fifties.”

Well, I didn’t know his grandfather from Adam’s housecat so I asked him who his granddaddy was and he said, “You probably don’t remember him, but you ate in his restaurant your first year at Alabama and you sent him a picture that he’s had hung in that place ever since. That picture’s his pride and joy and he still tells everybody about the day that Bear Bryant came in and had chitlins with him. My grandpa said that when you left there, he never expected you to remember him or to send him that picture, but you kept your word to him and sent your signed picture to Grandpa, that meant everything to him. He said you could teach me more than football and I had to play for a man like you, so I guess I’m going to  come play for you and Alabama.”

I was floored. But I had learned a long time ago that the lessons my mama taught me were always right. This one is: “It don’t cost nuthin’ to be nice. It don’t cost ‘nuthin’ to do the right thing most of the time, and it costs a lot to lose your good name by breakin’ your word to someone.”

When I went back to sign that boy, I looked up his Grandpa, he’s still running that restaurant, but it looks a lot better now; and he didn’t have chitlins that day, but he had some ribs that ‘woulda’ made Dreamland proud and I made sure I posed for a lot of pictures; and don’t think I didn’t leave some new ones for him, too, along with a signed football.

I made it clear to all my assistants to keep this story and these lessons in mind when they’re out on the road recruiting. And if you remember anything else from me, remember this – “It really doesn’t cost anything to be nice, and the rewards can be unimaginable.”

Editor’s note:
Coach Bryant (September 11, 1913 – January 26, 1983) is a legendary sports figure. But his legacy of being a good guy is what shines in the story he told above:  you leave a lasting impression by how you treat others, and how you behave in the presence of others.