Story: Hannah Pours Her Heart Out to God 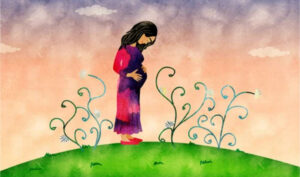 This is an old story.

There once was a man who lived far away in a town called Ramah. He was descended from a family in the Ephraim hills. His name was Elkanah.

Elkanah had two wives. The first was Hannah. The second was Peninnah. Peninnah gave him children, but Hannah could not.

Every year Elkanah went from his hometown to the temple sanctuary in Shiloh to worship.

There he saw the priests, and he offered a sacrifice to God. When Elkanah sacrificed, he passed helpings from the sacrificial meal to his wife Peninnah and all her children. Still, he always gave an exceptionally generous helping to Hannah because he loved her so much, and God had not given her children.

But behind the scenes, the rival wife taunted Hannah cruelly, rubbing it in and never letting her forget her barren state.

This went on year after year. Every time Hannah went to the sanctuary of God, she feared abuse from Peninnah, and every year, she would stoically take her verbal beatings.

Finally, one year she could take no more. The barrage of insults and unkind words reduced Hannah to tears, and she had no appetite for her husband’s gracious offering.

“Oh, Hannah, why are you crying? Why aren’t you eating? And why are you so upset? Am I not of more worth to you than ten sons?” The bewildered Elkanah asked his sad wife.

Hannah put on a good face, though her heart was breaking. She slipped away quietly and went to the sanctuary. The priest on duty at the entrance to God’s Temple sat in his customary seat.

Crushed in soul, Hannah prayed to God and cried and cried—inconsolably. Then she made a vow: Oh, God-of-the-Angel-Armies, if You’ll take a good, hard look at my pain, if you’ll quit neglecting me and go into action for me by giving me a son, I’ll give him completely, unreservedly to you. I’ll set him apart for a life of holy discipline.

It so happened that as she continued in prayer before God, the priest was watching her closely.

Hannah was praying in her heart silently. Her lips moved, but no sound was heard. The priest jumped to the conclusion that she was drunk.

He approached her and said, “You’re drunk! How long do you plan to keep this up? Sober up, woman!”

Hannah replied, “Oh no, sir—please! I’m a woman who is brokenhearted. I haven’t been drinking. Not a drop of wine or beer. The only thing I’ve been pouring out is my heart, pouring it out to God. Don’t for a minute think I’m a bad woman. I’m so desperately unhappy and in such pain that I’ve stayed here so long.”

The priest knew her words were true. “Go in peace. And may God give you what you have asked for.”

She thanked him. “Think well of me—and pray for me!” Hannah went on her way back to Elkahana. There she ate heartily from the sumptuous meal, her face radiant.

Up before dawn, they worshiped God and returned home to Ramah. Elkanah slept with Hannah, his wife, and God began making the necessary arrangements in response to what she had asked for at the sanctuary.

Before the year was out, Hannah conceived and gave birth to a son. She named him Samuel, explaining, “I asked God for him.”

When Elkanah next took his family on their annual trip to the sanctuary in Shiloh to worship God, offering sacrifices and keeping his vow, Hannah didn’t go.

She told her husband, “After the child is weaned, I’ll bring him myself and present him before God—and that’s where he’ll stay, for good.”

Elkanah said to his wife, “Do what you think is best. Stay home until you have weaned him. Yes! Let God complete what God has begun!”

So she did. She stayed home and nursed her son until she had weaned him. Then she took the young child to the sanctuary in Shiloh, bringing the makings of a generous, sacrificial meal—a prize bull, flour, and wine.

They first butchered the bull at the temple, then brought the child to the priest.

Hannah said, “Excuse me, sir. Would you believe that I’m the very woman who was standing before you at this very spot, praying to God? I prayed for this child, and God gave me what I asked. And now I have dedicated my son to God for life.”

Then and there, Hannah and the priest worshiped God in awe and splendor.