Story: The Right Words of Consolation 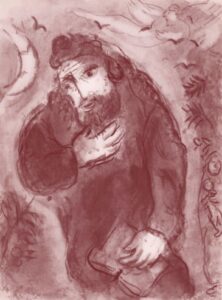 The son of the great sage Yochanan ben Zakai passed away. He was heartsick and despondent. It seemed that he was inconsolable.

His disciples came one by one to offer words of comfort. Eliezer went to the chambers of his great teacher.

“Master, Adam had a son who died, and we know he allowed himself to be consoled. Genesis 4:1 says, ‘Adam was again intimate with his wife.’ Surely God wants you to be consoled.

The great Master Yochanan replied, “Isn’t it enough that I am grieving for my son? You tell me of Adam’s loss, and it pains me even more. You may go.”

“Beloved Master, from the bible, we learn that Job had sons and daughters who all died in one horrific day. ‘ God has given, and God has taken, may God’s name be blessed.’ Job 1:21.

The beloved teacher replied, “It’s enough that I am grieving for my own son; why do you add to my pain and remind me of Job’s sorrow?”

One Yosei and then Shimon followed the other with their words of scripture to comfort their Master. Yosei reminded Yochanan ben Zakai of Leviticus 10:3. Aaron kept silent, which implied that he accepted consolation without grieving his two son’s sudden deaths. Shimon used the verse from Samuel 12:24, which described King David not only accepting consolation but offering it to his wife Bathsheba when their son died.

To them, as to the others, the heartsick teacher replied, “Aaron’s, David’s and Bathsheba’s grief only adds to my own and is not a comfort.”

Yochanan dismissed his disciples. He was all alone now. There was a knock on the door. A servant announced that the esteemed Master Elazar ben Arach himself had come to offer words of comfort.

He prayed, “Lord help me; I will not be able to withstand yet another attempt to console me.”

The highly revered Master Elazar sat before Yochanan. He shared a different perspective.

“Your situation is similar to that of the king who entrusted a most valuable article to one of his subjects for safekeeping. ‘The able but worried young man thought ‘How will I be able to protect the king’s most precious possession against damage, theft or loss?'”

“Dear Master Yochanan, you too were entrusted with keeping safe the King’s most precious possession. Your son, of blessed memory, was born to you and on loan from God. The Lord, our God, is surely pleased that you have returned the boy in perfect condition.  Your son was the pride and joy of the community. He was kind, generous, and humble. He helped the poor and stood up for justice. He was learned and righteous and a true hero for our times. May you be comforted to know that his soul is at peace with God and receiving the reward for life on Earth spent well.”

Yochanan was comforted, and all was again, right in his world.