Story: ‘Twas the Night Before Halloween 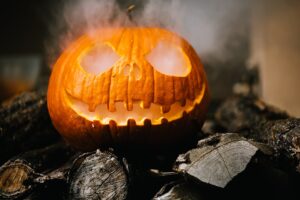 ‘Twas the night before Halloween and all through the house,
All the creatures were stirring including the mouse.

Costumes and sacks hung by the door with care,
For hopes that candy and the Great Pumpkin would soon be there.

The children lie awake with spooky tales floating in their heads,
Worried about goblins and ghosts in their bed.

Ma and I carving pumpkins with care, the crooked grinned jack o lanterns would raise such a clatter,
Neighbors would have to come see what was the matter.

Away to the window to see a full moon glow, a witches cackle came to follow. “As dry leaves that before the wild hurricane fly!”
Her eight tiny spiders, pulling her up oh so high in the night sky.

So up to the house-top the coursers they flew,
With a jack ‘o lantern carriage filled with tricks, treats and the Great Pumpkin too.

And then, an evil cackle, I heard on the house top,
The tapping and thumping just would not stop.

As I drew in my head, and was turning around,
Down the chimney, the Great Pumpkin came with a bound.

It was dressed all in black and orange from head to foot,
And its clothes were all tarnished with ashes and soot,

A bundle of tricks and treats it had flung on its back,
And it looked like a monster just opening its pack.

It’s eyes – how they glowed! Its grin how evil!
Its cheeks were like corpses, Its nose like a weevil.

Its droll little mouth was drawn up with fangs,
And the beard of its chin was pitch black and stained.

The stump of a pipe it held tight in its teeth,
And the smoke it encircled its head like a wreath.

It had a thin face and an enormous belly,
It was grotesque like a monster and ever-so smelly.

I cringed when I saw it, the wink of its eye and the twist of its head,
Soon gave me to know that I was very right to dread.

It went straight to its work, and made not a sound,
Filled all the sacks with tricks and treats to be downed.

And laying a finger aside of its nose,
And giving a nod, up the chimney it rose.

It sprang to the sky, to its team gave a yell,
And away they all flew like a bat out of…

But I heard it exclaim, as they sped out of sight,
“Happy Halloween to all, and to all a good-night.”