Story: It All Works Out 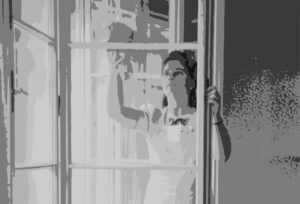 Sure, I can remember when I got the job; it was November 1998. I had a brief interview with Maria Juarez; she was the head housekeeper at the time. I was hired immediately and started the next morning at 5:30 am. I worked for Maria J. for two years, then Maria R., she lasted only a couple of months, and then Maria F. took over. It was a job nobody wanted. Three Marias in that stinking position, and we teased the other housekeepers who were named Maria that they’d be our next boss.

There were always plenty of women named Maria on staff. We were all Latina women working at the Plaza back then, some of us legal many without papers. Management didn’t check, and they didn’t care. We worked cheap, and profit was all that mattered at our hotel.

The Plaza was privately owned by slum landlords of the hotel world. The owners were a small group of international investors who never came to visit. The bought us for the real estate and kept the hotel operating on a shoestring. It was a dump, but it was my hotel, and I always gave it my very best.

My cart was my alter. I’d roll it proudly from room to room, thankful to God that I had a job to do. Mini shampoos, soaps, and paper-thin worn linens would come off the cart, and I would strip, remake the beds, and leave the room clean and sanitary, always ready for the next guests.

One day, early on, when I was still green and trusting, I knocked on 703.

I used my key and walked through the door with supplies in my hands. The man was standing in front of me with just a towel around his waist. I turned to leave, and he grabbed me by my ponytail. I dropped everything and started to scream when he put his disgusting hand on my mouth and threw me down on the bed in one practiced motion. Right before he raped me, I thought, He’s done this before.

After it was over, my attacker got up and went into the shower, confident that there was no hurry, and certain that there would be no consequence for his deed.

I gathered strength and stopped the tears from flowing as I made my escape. I left my cart in the hall, ran down seven floors of stairs to the basement housekeeping office. I told Maria what happened.

She shook her head and told me to sit down and calm down. There would be no report, no police, no arrest. It’s happened before.

“You’re on your own on the floors.”

She cautioned me to be more careful next time.

“Clean yourself up, and I’ll be right back with your cart.”

When Maria returned, she looked at her clipboard, and unapologetically said, “Take the fifth floor.”

I went back to work.

I made $8.83 hr cleaning rooms in 2003 at the Plaza. I earned standard wages in the industry, and I didn’t complain. It was the best I could make as a Spanish speaking woman. One day in late August, the hotel manager made an announcement. Wages were to be cut by 7%, the hotel’s health care contribution would stop, and the hotel would begin using contract employees.

We came to expect incremental raises in wages and benefits, but not drastic cuts and outsourced labor. I was a proud dues-paying member of the Hospitality Union local 1435, so I didn’t worry. Our union was at the bargaining table with the Plaza and eighty-nine other downtown hotels negotiating for more, not less.

The showdown was splendid. We went on strike for our rights, and other union groups joined our walk-out. We were in complete solidarity. The city was briefly crippled, and the public was on our side.

It took two excruciating weeks of negotiations. There were some concessions, but HU Local 1435 got its members a fair deal. The package included continued healthcare contributions, 7% raise instead of reduction, and rather than unlimited contract workers, there would be restrictions.

The day I heard the news, I was elated. The city celebrated. Relief flooded through me. I could get off the picket line and get back to work. I eagerly called Maria about the schedule.

“The Plaza is holding out. Eighty-nine hotels signed the new contract, one lone hotel refused. It’s not over for us, Esme. See you tomorrow on the line.”

I was at a crossroads. I could have accepted the results of the negotiations and gone back to work at the reduced compensation. That would have been the cowardly path. Another option was to quit the Plaza after five years of service and find another job at a different hotel downtown. That would be the pragmatic way to go. Or, I could stand with my co-workers who vowed to continue the strike and show the hotel’s owners that they can’t oppress their workers and get away with it anymore. That would take courage, conviction, and sacrifice – the Godly way.

I chose to re-join the picket line.

It’s been ten years, and today almost half of the 150 original strikers are still walking the picket line at the Plaza hotel. The union pays us a small salary for our commitment of twenty hours a week to rally against the injustice. We’ve been successful in encouraging guests to cancel their travel and social plans at the hotel. We calculate that our efforts have cost the hotel hundreds of thousands of dollars over the years. The Plaza strike is used as a disastrous public relations example in other collective bargaining situations. The workers continue to benefit.

Yet, the end is near. Union officials told us the hotel is closing. Real estate developers bought the landmark building and will be converting the hotel rooms to condos. The strike is ending on Friday at 5:00 pm to coincide with the Plaza shutting its doors. We are organizing a spectacular rally in front of the Plaza, where we’ve all spent so much time defending worker’s rights. The press will cover it, and prominent activists from all over the country will attend. I will be introducing the speakers. I am humbled and honored.

I’ve spent these past ten years improving myself. I am fluent in English. The sidewalk in front of the hotel became my classroom. I listened to books on tape, then podcasts, and even college-level online classes. I am grateful to God for the thousands of hours of education I received as a result of the strike.

I look forward to a better future where hard-working people can earn a living wage and contribute to America’s economy. In a better future, low wage workers’ voices will be heard when they are cheated or abused. America is a land of opportunity, with liberty and justice for all. God bless America.

About this story: I was searching for a Labor Day story inspiration and I came across the Congress Hotel strike in Chicago that lasted from 2003 – 2013. I walked past that picket line often in those ten years and never understood what the strike was all about, until recently. “Work it Out” is a story from a housekeeper’s point of view. I imagined how ten years on a picket line could change someone. This is the story I wrote honoring all the Esme’s who work in the hospitality industry.  – Susan