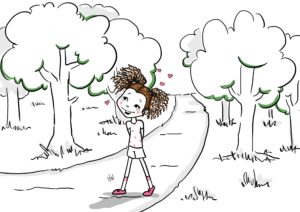 WALK IN THE WOODS

A bike can only get you so far. Maggie had an urge – no a craving – no – a whole-hearted desire to go to the woods. She loved the open field at the entrance of her suburban sub division, but that day it wasn’t enough. It felt lonely and she wanted company. The forest was where she wanted to be. And as it happened there was a day off from school, it was autumn, the day was long and hers to do with it what she wanted. And (as I said before) Maggie wanted to go to the woods.

Preparation is key to an adventure like this one and she plotted out her route. She could ride her bike to the Metra, take the 10:30 am north central train southbound. Get off at Roselle walk four blocks and find the entrance to the Jack Stanley Forest Preserve.

She was there by noon.

The forest is a crowded place. There are tall trees, long branches, and thick green undergrowth carpeting the floor of the forest. There’s a river in Stanley Woods with murky green water and muddy banks.

Mother Nature fills her home with all sorts of delightful critters too. Some that crawl, fly or swim, and others that walk or run.

The one thing missing on Maggie’s outing was other people. A weekday in the woods, is not prime time. Yet Maggie wasn’t lonely or scared. She was thrilled.

Maggie was walking. She found a path that followed the river (mostly) and she took it. There hadn’t been much rain so the river was low and she could see the gnarly tree roots by its banks. So much to look at, so much time to take in her surroundings.

That’s why she was surprised when she checked her phone and realized it was past three and time to head back home. Maggie did an about-face, kept on walking (quicker and with more determination) until she reached the spot where she started.

With a sigh and a smile, whole-hearted Maggie did something holy. She prayed with praise to God, Creator of all and everything. “Thank You Father, for the beauty in the world and for allowing me to appreciate it.”