Story: She Leads and Succeeds 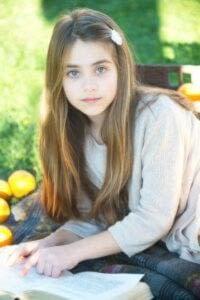 Kirsten Marie Frances Nowak is that girl you noticed when you picked your son up early from middle-school last week for his dentist appointment.

You saw her in the playground sitting alone on a bench reading a book…with pages. The other girls were clustered in groups talking, squealing, and laughing (some too loudly) and many of the boys sat silently on the asphalt playing Fortnite on their phones or looking over the shoulder of Joey who was having a tremendous game going at the time.

You felt sorry for Kirsten Marie Frances Nowak. You figured she was unhappy, unpopular, hiding in the pages, but you got it wrong.

Even though she is different from the other children, she is well liked by her classmates. She has plenty of friends across the pre-teen social landscape. She fits in with the jocks, the band nerds, the eggheads, the geeks and freaks. She is all of the above.

Kirsten is unusual, she’s not your typical twelve year old. She is intellectually gifted, socially at ease, a talented athlete and a musical virtuoso. God carefully made Kirsten to do great things, to lead and succeed.

What does it take to lead and succeed? What does this little girl have to do to reach her potential, to fulfill her destiny? What has to happen for the path to be clear so Kirsten Marie Frances Nowak can walk it in excellence?

Before we ponder those questions, let me tell you what was happening to Kirsten the morning of that day you first saw her in the schoolyard.

She was standing by the toaster oven waiting for her frozen waffle to brown. The fork she would use was ready on her right and the plastic bottle of maple syrup was on her left.

Her Mom walked in to the kitchen and said, “We have to talk.” The toaster oven dinged. The waffle was ready but never eaten.

Kirsten was told her Dad’s most recent doctor appointment did not go well. Their latest hope was a disappointment – again. Her father has pancreatic cancer, late stage. He is not a candidate for surgery. There are no good options. They would make arrangements for hospice.

Kirsten was not surprised, she knew it was coming. Yet, hearing her Mom say it with such finality was a crushing blow. Her Dad is thirty-seven and will not likely see his next birthday. Mother and daughter hugged, and cried. But not for long. Kirsten had to get to school.

That’s the kind of work ethic the Nowaks hold. They do their jobs despite the real time life changing events happening to them. Dr. Nowak would go the lab. Professor Nowak would teach his afternoon class that day. Kirsten would go to school.

She walked the mile and a half instead of taking the bus. Kirsten needed time to think, she needed time to have a conversation with her God. After all, they were in this thing together and she had questions. Good questions only her Maker could answer.

One of the reasons Kirsten is well respected and very much admired is because she is a good listener. Young or old, the saints and the sinners, they all walk away from a conversation with Kirsten knowing they have been heard. The good Lord is no exception. Kirsten hears God with unearthly acuity.

Only Kirsten and her Mom are left to carry on, the extended family lives in Poland, it’s not easy grieving via Skype – but they do it.

Kirsten submits an entry to the Philadelphia Freedom Civics Contest. She wins it with her essay about how social media would have been the perfect vehicle for Alexander Hamilton’s Federalist Papers. The day you saw her she was reading the Ron Chernow biography of Hamilton. She is obsessed with the founding father.

She begins writing about democracy and freedom and the current issues crippling the government today. Like Hamilton, she’s a passionate pragmatist. Her smart writing and social savvy quickly gets her a wide and politically diverse audience.

One of her Medium articles gets shared by Gwyneth Paltrow’s “Goop” newsletter. Kirsten Nowak is trending on Twitter.

She is invited to sit on a panel at the 2020 Washington D.C. Public Affairs Conference. She declines, she’ll be away at sleepover camp.

Word gets out that the newest political pundit is a twelve year old middle-schooler. Kirsten and her mother are besieged with interview requests. The View, Stephen Colbert, Late Night with Jimmy Fallon, to name a few. They decline. She has a piano recital coming up and she has to practice.

But the real dilemma isn’t scheduling. It’s purpose. Kirsten needs to think deeply about the right way to use the talent God gave her. She needs to figure out the right timing too.

Kirsten Marie Frances Nowak does not allow the lure of celebrity to distract her. She is a multi-purpose leader with a long term plan. She reflects on Ecclesiastes 3:1 There is a time and a season for every purpose under heaven.

She wins first prize in the Philadelphia Freedom contest. Manuel-Lin Miranda presents her with the award; an all expense paid trip to New York to visit the United Nations, experience the 9/11 museum and to see Miranda’s hit Broadway musical: Hamilton. The trip is to be a highlight of what will be a long successful and happy life for the future President of the United States, Kirsten Marie Frances Nowak.

By Susan Diamond
READ MORE by this author