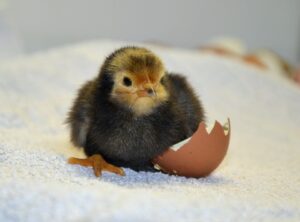 Libby knows hardship and struggle. She is only eight years old with little guidance from her mother or father, who are virtually absent in her young life.

You could call her a free-range child. She is free to wonder and wander about in her neighborhood, walking for miles after school to explore and discover nature’s mysteries.

One hot summer day, she notices something unusual in the side yard of a blue-colored one-story house on Maypole street. There is a chicken pen with birds in it. They are walking around pecking and peeping. A rickety ramp leads to a little house with a green roof and white windows.

Libby walks up to get a closer look.

Nobody is around. The chickens are on their own. Off in the corner of the pen is a lone egg. Libby knows what an egg is, but she never before saw what could happen to an egg that isn’t in her refrigerator. This one was very different.

The chicken coop egg is cracked in many places, and she can see tiny thin lines getting longer and larger. Libby watches intently as a baby chick pecks its way out of the hatching egg.

Libby’s heart is bursting with sadness.

“Look how that baby chick is struggling!” She says out loud.

It’s to watch the newborn chick shake and tremble to release itself from the shell.

She must do something to help it. Libby reaches inside the coop and starts to gently break away the shell.

Just then, a man comes out of the blue house. Quietly and calmly, he walks over to Libby and the egg. He lifts his hand to motion “stop” to the little girl.

She looks up at the man with tears streaming down her face and obeys his command.

He takes Libby by the hand, and they sit on the back steps where they watch the coop without disturbing the chicks.

He explains. “The birth process for a newborn chick requires struggle. God plans it that way. Struggles give the baby bird the strength needed to survive in life. We mustn’t interfere. Sometimes help can hurt.”

Libby knows all about hurt.

He continues. “It’s the same way with people.”

She thinks carefully about what the man is explaining to her.

She realizes; she is growing stronger from her own struggles.

“Let’s thank God now.” She says to the man from the blue house.

And so, they do. The two new friends pray together in the presence of God’s miracles and wisdom.

READ MORE stories by this author