Story: No One Should Have to Live Past 100 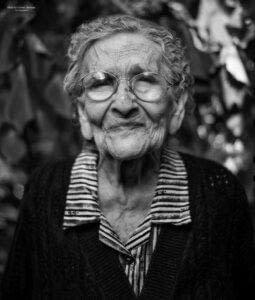 Tillie Pfelzer thought maybe God wasn’t paying attention so she took matters into her own hands. She left her husband behind and took her daughter to safety in London where she found work as a housekeeper.

Arrangements were made for her teenage daughter Liesel to live with a family in the countryside. She was there for two years.

Tillie finally got the letter she was waiting for. Her husband secured passage to America for the three of them and they made a new life in Chicago, rarely speaking of the dark days in Europe.

They lived in the present with an eye for the future. Liesel Americanized her name and became Lee. She worked the perfume counter at Marshall Fields and met Henry Brown who was buying a bottle of White Shoulders for his mother. They married soon after and Barbara was born one year later. Their little daughter was God’s gift to a family who craved continuity.

Life was good for the Pfelzer-Brown clan. They were a very nice family but there was nothing extraordinary about them until many years later when Tillie turned one hundred. Her husband was long gone, Lee and Henry were senior citizens themselves and even Barbara was a grandmother.

Living to a hundred is not a common feat but there are plenty of people who do it. Famous ones too. George Burns and Bob Hope both lived to a hundred but Tillie had them beat by years and decades. Tillie lived in the 1800’s, 1900’s, and 2000’s – three decades of being alive and well.

She now had a claim to fame…if she wanted it. But she didn’t.

As Tillie aged past 100 and then past 105, there were a few requests for interviews from local news looking for a feel-good story. She declined. She was still interested in the news going on around her, but Tillie had no interest in being a news maker. She was a survivor. Privacy was always her cover.

Lee died in in 2001. No one should know the grief of burying a child, but age softens the blow. Tillie took it stoically and lived on for almost two more years.

She died when her parts wore out. Literally. Her habit towards the end was to read and listen to the radio in her easy chair with her feet propped up on the ottoman. 107 year old skin is thin and the rubbing from the ottoman fabric on the back of her heels caused an infection which was what eventually did her in.

At her funeral there were the usual condolences.

“May her memory forever be a blessing.”

“At least she didn’t suffer.”

At the shiva there were memories shared.

“Remember how GiGi used to salt her food before she tasted it? Heaviest hand to the salt shaker and never needed a blood pressure pill.”

But what I have to say about Tillie is the simple truth she spoke.

I am 101 years old and I am tired. Lord have mercy. Bring me home soon.

By Susan Diamond
READ MORE by this author.