Story: Other Side of Love 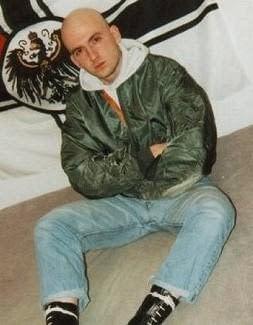 He was just a kid back then. A lonely kid, bewildered by how his life took a bad turn. It wasn’t his fault – he knew that yet somehow he felt responsible. He felt guilty. He felt dirty.

That’s how Johann described it to me thirty-five years later when I interviewed him for a magazine article I was writing about white supremacists.

His parents divorced the year he was in the ninth grade. Father moved out and Mother was overwhelmed with the task of being a single working mom to her one teenage son. She was absent in the home and her once loving heart had turned cold.

Johann was truly on his own.

There was no escape from the dark cloud he was living under. He was alternately ignored and bullied in school. He was friendless. He could find no happiness at home or school, and he had no social circle to support him.

Until Johann found what he didn’t know he was looking for.

And that’s how Johann found his place in the world.

Kids will be kids and some German teenagers liked to joke around during the Holocaust lessons. They would “Heil Hitler” each other, make mean jokes about Jews, draw racist pictures.

Turns out, Johann was very good at hating. He would crack a few Jew jokes and the other kids laughed. And this became his entree to a perverted type of popularity. He became known as the “Nazi kid.” He was protected by his new image and even respected for it.

A new decade was dawning. There was a new world order in Germany with the fall of the Berlin wall summer of ’89.  A brand new era of Internet and online connections opened up that were previously unavailable to a lonely angry kid like Johann.

Some of the earliest activities online were hate groups. Johann could dial up his Internet connection and make friends with other like-minded people – far-right radicals, white supremacists, and Neo-Nazis.

Johann found his niche with a sub-culture of young people who wore their hair closely cropped or shaved, and identified as “Skinheads.” There was an expected way to dress, with tall black boots, suspenders, and blue jeans rolled up at the leg. Johann dressed the part and lived the Skinhead lifestyle. Punk music was at its core. Graphic, violent lyrics with ear-shattering chords that sent thrills through every fiber of young Johann’s core.

It was the music that propelled him to leadership.

Johann’s hate-filled wit was perfectly suited for writing punk lyrics, and he discovered a natural musical ability which allowed him to write the songs and perform the music which Skinheads worshipped.

He was a star on the stage and a rising star in the white supremacist movement.

The Ku Klux Klan (KKK) offered him a good-paying job to head the European KKK. He was married by now with two kids and had a family to support. He had a business acumen that served him well and the organization grew under his leadership. Johann had certainly turned his life around from the lonely child he once was.

And then one day he got a visit from the Federal Intelligence Service. The agent told him he was being closely watched by the authorities. And though they knew he himself had not been directly involved in any acts of violence or hate crimes, if anyone of his members did anything illegal, Johann himself would be held responsible and go to jail.

He was scared straight.

Johann quit his job, gave up his lifestyle and moved his family to a quiet suburban town two hours from Berlin. He found an affordable apartment for their family of four and got an office job with an insurance agency.

There was only one problem with his solution. The landlord who lived in the apartment downstairs was a Turkish Muslim man. The enemy.

The first time he met Mr. Abad, Johann was outwardly polite and inwardly seething. On the other side, Mr. Abad was kind and courteous to his new tenant and felt nothing but love for the young German man standing before him.

As determined as Johann was to keep his distance from Mr. Abad, Mr. Abad was equally focused on building a true friendship.

There were gifts of sweets homemade by Mrs. Abad and delivered to the apartment upstairs. On hot days Mr. Abad would turn on the sprinkler and encourage Johann’s boys to play in the water and cool off.

Mrs. Abad extended her kindness to the family as well.  Once when one of the boys had an earache, Mrs. Abad insisted on going to the pharmacy to get the needed medicine. She became a good friend and helper to Johann’s wife.

It was the personal relationship that developed between the two families that changed Johann’s way of thinking. Before, he held hatred in his heart and waved it proudly like a flag on display. But now, it just didn’t feel right. In fact, as the months passed, and Johann was removed from the day to day toxicity of living the white supremacist coda, he found himself questioning his once deeply held beliefs. And the answers he found pointed to love not hate.

Johann sought out others like him who came to the same conclusions after spending time in the movement. He led support groups, shared resources for others to transition to a new life, a fresh start.

Just as the Internet introduced Johann to communities of hate, Johann used the Internet to tell his story and encourage others to consider a different lifestyle.

Johann’s online popularity caught the attention of an organization in the United States whose mission is to stop the spread of hate and terrorism and to protect the human rights of Jews, Muslims, Blacks, and other oppressed minorities. They offered him a job.

Johann now tours the world, telling his story. He works with government officials to develop anti-hate legislation and policies. He conducts workshops at prisons and for law enforcement professionals to share ideas for hate criminal’s reform. He trains educators on how to recognize the vulnerable children and help them avoid the pitfalls of affiliation with hate groups. He is now an activist speaking out against hate.

Johann’s story is one with a happy and never-ending-ending. Hate is as old as the Bible and it’s hard to imagine a time when humanity will be hate-free. But then I thought about our hero in this particular story. The name Johann is the Germanized version of the Latin “Iohannes”, the Greek “Iōannēs” and, its ultimate source, the Hebrew “Yochanan” – all of which translate to “Yahweh (God) is merciful”.

Yes, God is merciful and that’s always a happy ending.

By Susan Diamond
read more by this author