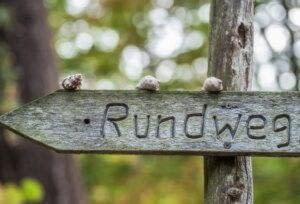 Joe Cramer got off the highway and took the road less traveled. He drove east for a good hour until something caught his eye. It was a small hand-made sign that said, “Rudweg.” It was barely visible and nailed to a tree.

As Joe tells it: “The good Lord must have been with me at the wheel, ’cause soon as I came upon the sign, my car made a sharp left turn down this unpaved road.”

After about twenty more minutes, Joe saw signs of activity. Three boys were riding their bikes. The biggest one was the first to see Joe’s gray Ford Explorer. He stopped pedaling and hopped off the bike to stare. The other boys did the same.

“That’s odd.” thought Joe. “Folks around here must not see too many strangers.” He waved and continued down the narrow road.

There was a small house on his right. It looked like it was built in the 1950s, mid-century ranch house, the kind that’s being snapped up by Millenials, who are gentrifying modest suburban neighborhoods on the outskirts of the city. This one was obviously in its original form; clearly, there was no renovation boom in Rudweg, Ohio.

Another small sign nailed to a tree on the side of the road had an arrow at a dusty intersection:” Turn right.” He did.

Joe was coming up to what looked like Rufweg’s Main street. He saw a small grocery store, a post office, the “Country Cafe,” a storefront bank, and a barbershop.

It was a charming little town, authentic in its old-fashioned way. The street was paved, the sidewalks were too. The bank branch had a newer style sign in the window with a familiar blue octagon. Joe chuckled to himself, J.P. Morgan Chase branch bank – proof positive, they’re everywhere!

The Country Cafe had red curtains in the window, and a door frame with glass inset, half-covered by a window shade and a sign turned to “Come On In, We’re Open.”

The grocery store had a small parking lot in front, and there were precisely two cars and one pick-up truck in the lot.

The post office flew a great big American flag just under the roofline.

At the end of the street, was Karl’s Barber Shop, complete with a vintage red, white, and blue barber pole perched on a wooden front porch. On the porch, four older men sat on folding chairs. None of the men were talking. Joe walked by the group, waved, and walked on to the Country Cafe.

He walked into the diner, sat at the counter, and looked around. Two women were seated side-by-side three stools to his right. All three booths were taken. A family of four with young children sat at a table. It was lunchtime, and the place was reasonably full, yet, like the boys on the bikes, and the men at the barbershop, no one was talking.

Joe is a friendly fellow. He likes to talk. Some might say he talks too much. He’ll often fill a pause in conversation with nervous chit-chat, and he has a long-standing habit of talking incessantly.

He turned to the two young women a couple of stools down from him. “Excuse me, I’m just passing through, and I’m noticing that Rudweg is a very quiet town. I don’t want to get arrested,” he joked, “is there a law against talking in town?”

Both women looked at him as he spoke, but neither woman answered him. They turned back to their meal and continued eating silently.

The waitress watched the scene unfold, and she walked over to where Joe was sitting.

“Mister, I can explain. There’s no law against talking, but we do have an understanding around here; unless you are certain you can improve upon the silence, don’t spoil it with idle talk.”

He thought deeply about the value of silence. The waitress was God’s messenger, and the town is holy ground.

Joe left the tiny town a changed man. He talks less, listens more, and worships the spiritual practice of silence.

The old Joe would have talked about it. The new Joe simply lives it.

By Susan Diamond
Read More from this author