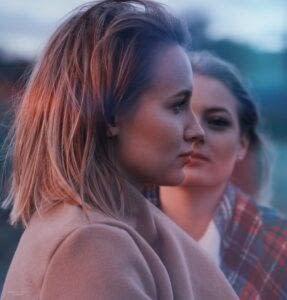 It’s not easy for me to forgive my sister. It’s been seven long years since the incident that ended our relationship. Each day is a new day of hurt and longing to be back in the family’s good graces. Each day I relive that fateful day and I get angry all over again.

First I should mention, my resentment had been building up for years. My sister has alternately ignored me or been mean to me since we were toddlers. There was never any of that sisterly love or loyalty I saw between other sisters – I wish there was. But I accept it now, and it hurts.

Lauren is the oldest of us kids, I‘m next by two years, Mark is two years younger than me and Donald is one year younger than Mark.

Lauren played the little mom to Mark and then Donald growing up. The three of them have always been close. I am “odd man out.”

It was my sophomore year in college when I met my husband Steven. I introduced him to my family Thanksgiving of that year. He noticed Lauren’s attitude right away.

“What’s up with your sister?” He asked.

“Her loss.” Steven said as he gave me a hug with an extra squeeze.

And so it went, going to family functions facing the indifference and sharp tongue of my sister but this time with an ally by my side.

I have a good life partner who supports me through thick and thin. He stands by my side when family squabbles. He speaks up to defend me when I am on the receiving end of my family’s unjust accusations.

It never occurred to me Steven could be at the center of Lauren’s wrath until that dark December day when my sister dealt a deadly blow to our relationship.

Here’s how it came down.

Lauren’s father-in-law died. Chuck was a jerk when he lived and became the catalyst to our family’s break-up when he died.

Steven and I were at the funeral home sitting next to my cousins as the funeral director came to the podium to address the large group attending the funeral.

“The following men will serve as pall bearers, Mark Lane, Donald Lane…” On he went naming five others. Steven was not among those called to serve.

I gasped. My cousins consoled me. Proof that this grand insult was not in my imagination, it was out there for the world to see.

My loving husband did what he always does, he shared my indignation. He got angry with me, by being angry at my sister and brother-in-law. He matched my resolve to never forgive Lauren and her husband.

We were done with my family.

The family picked sides. Mark called me right after to try and explain.

“Steven was never close to Chuck. He didn’t even like him.”

Donald hand wrote a letter, asking us to forget the incident and move on.

My mother made a date with me for lunch. She begged me to patch things up.

But the two people who caused all the trouble in the first place did not reach out. At least not right away.

This morning, after seven long years Lauren rang my doorbell.

She came with an apology in her heart. There on my doorstep Lauren asked me to forgive her for all the years of being unkind, neglectful, and for being a bad sister.

I asked her to come in.

We sat on the couch and the tears flowed from both of us. We held hands. Nothing was ever said about the funeral incident, or any other specific times in the past when she let me down. But somehow, I was okay with that.

Holding Lauren’s hands in mine worked a holy healing. God loomed large in my living room that day. We both noticed it at exactly the same time, in exactly the same way. It was physical, divine, and intensely satisfying. The tears stopped and calm rolled over us.

“Are you feeling what I am feeling?” Lauren asked me with hesitation on her lips.

It occurs to me now that in all the years of my life, my sister and I were forced to share many things. A bedroom. Pets. Clothes. Our parents’ attention. Yet we never shared our faith. We didn’t come from a family of church-goers. God was simply never a part of our life. We never learned Godly values. Our priorities were all wrong. I was a monument to stubbornness, bitterness, and pride. Lauren stood for pettiness, arrogance, and cruelty.

I thank God for interrupting us and showing us the way.

Why us? Why then? Why not sooner? Those are questions a skeptic would ask. I don’t ask, I simply tell my story.