Story: Through the Lens of Wonder 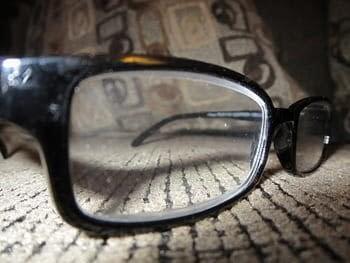 Harry was a carpenter by trade and a servant of God by passion. The community often called upon him to help with their service projects. “Can you build us a backdrop for the church play?” Or, “A refugee family needs bunk beds for their five children.” Harry would go wherever he was sent, tool bag in hand, love in his heart.

In the early 2000s, Harry was called upon to build large wooden crates to hold bales of used clothing, which would be sent to Darfur in Africa. Local churches, synagogues, and community groups got together and held a mammoth clothing drive to round up dearly needed clothing for the citizens of the war-torn country.

Harry was near-sighted and always wore a pair of tortoiseshell prescription eyeglasses when he needed to see in the distance; the world was fuzzy without them. But, for close-up work, his safety goggles were just fine, and he would put his eyeglasses in his shirt pocket until the close work was done.

One day, as Harry finished driving the last nail into the top of a crate ready for shipment, he reached for his eyeglasses, but they were gone. He looked everywhere – they were not to be found. Harry couldn’t possibly drive home without his glasses, and another volunteer offered to drive him home.

The next few months were a struggle. He had an old pair of glasses to wear – wire rim aviator style from the seventies. Harry’s high school glasses were far from the prescription he needed, yet they got him through while he put aside some meager savings, and finally had enough money to go to the eyeglass store in the mall and replace what was lost.

Harry lived paycheck to paycheck. He tithed first, paid his rent second, and other expenses came after that. He earned barely enough to meet his needs, and never enough for emergencies, but Harry had faith and knew God would provide. In this case, God did not provide opportunities for Harry to make extra money. Yet, years later, God’s provision would become clear.

It was a long bloody war in the Darfur region of Sudan with peace elusive as the government squabbled with tribal foes and the United Nations peacekeeping forces. As many people as could, he fled the area to neighboring countries and a few fortunate ones left for America to begin new lives abroad. One such man landed in Des Moines, Iowa. Oja Baba is now a beloved professor at Drake University, in his adopted home town. He has done well for himself. This humble man gives back to the community with his time and money.

Harry met Oja at a rally for a voter registration drive, where he helped erect a stage for the event. When his work was complete, he pulled up a folding chair off to the side, with a fresh-squeezed lemonade in hand, ready to enjoy the program.

Dr. Baba began his speech with a story, as all good speeches do. He told of his days as a war orphan in Sudan.

He was waiting excitedly as clothes from the United States were distributed to himself and other displaced persons. His clothes were in tatters. He was hoping for a Chicago Bulls t-shirt and a pair of American blue jeans. He got neither. Khakis and a plaid shirt were the second best thing, that’s what was chosen for him, and he was grateful. As Oja was kicking around the dirt near the piles of clothing, he uncovered something glistening brightly in the hot African sun. It was a pair of eyeglasses with tortoiseshell frames. He picked them up and tried them on, and looked through the lenses with wonder.

He was able to see sharp and clear in the distance. He could distinguish every speck of dirt, one from the other. He saw the faces of his friends and neighbors with clarity unknown to him before. God provides! He thought. Out loud, he declared, “Hallelujah!” Finding the glasses was a turning point for the boy. His confidence and good fortune grew. He won the prize everyone yearned for; a visa to go to America.

Harry was stunned as he listened to the story. It couldn’t be, but it must be. His eyeglasses made its way from his shirt pocket into the crate that was opened on the spot where Oja Baba kicked the dirt that fateful day. When Dr. Baba left the stage, Harry introduced himself and told the professor that those tortoiseshell glasses might have been – must have been his. Dr. Baba didn’t doubt it. The two stood facing each other, reveling in the moment of awe.

Then they started chattering about shared experiences in Iowa, how their paths may have crossed earlier, and how Dr. Baba still had the glasses tucked away in a box with his original immigration papers and other keepsakes. Harry half-jokingly suggested they try on each other’s eyeglasses as if to confirm the miracle. The two grown men, one older, one younger switched their spectacles and looked around through the other’s lenses. Yes, indeed, they shared the same prescription all these years later.

It reminded Oja Baba of the wise proverb, “To understand a man, you’ve got to walk a mile in his shoes.” Well surely, Oja “walked” in Harry’s “shoes,” and his vision became sharp and clear with the thought; “understanding” Harry was the reason for his success. The eyeglasses lost by a faithful servant of the Lord were sacred. It is one of the many mysterious ways God works among us.

They exchanged the glasses once more, said goodbye, promised to keep in touch, and thanked a gracious God for making an unlikely connection. Dr. Baba now has a longer story to tell, and Harry has a new one. This is the stuff legends are made of, and this legend is a powerful way to share the faith.

A work of fiction by Susan Diamond
READ MORE from Susan