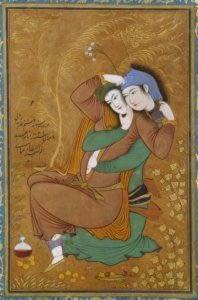 In a distant land a long time ago, before there was hand sanitizer and antibiotics, there lived a young couple in love and in despair.

It was a quiet Sunday morning when trouble visited the living quarters of Daizo and Emi. The wife was ill and near term in her first pregnancy. Up to this point the pregnancy had been healthy and uneventful.

Emi was struck down by fever. Daizo was beside himself with worry. His adored wife was so weak she could not lift her head from the pillows. Every hour his strong hands would turn her fragile head to gaze at the leafy kaku tree beyond the pane of glass from her bedroom window. Husband fed his wife droplets of tea through parched lips while he prayed to the Gods to remove the evil spirits who brought sickness upon his wife and unborn child.

Daizo sent a messenger to alert the good doctor of Emi’s illness. As he patiently waited he performed his nursing routine, comforted his ailing wife and he prayed.

Kenji-san arrived in a fortnight. Emi’s condition had only worsened. After a thorough examination of body, mind, and spirit, the doctor spoke to Daizo outside of the bedchamber.

“Your wife’s heartbeat is holding on by a thin strand, but can be fortified with medicine. Her mind is still active, churning with thoughts and worry, she believes her end has come. Her spirit is sagging, lost with no sliver of hope. The baby is in distress and is fighting with tiny fists to be saved.”

Daizo was encouraged by the physician’s report. Surely with a stronger body fortified by the latest modern medicine, Emi’s mind and spirit would come around and his wife and child would be saved.

Ah, but the human spirit feeds on hope, and without it no medicine in the world will fix an ailing heart. One week later there was no change, in fact Emi’s condition worsened. She used her failing breaths to whisper to Daizo.

“dear husband…I love you…my season is soon over…I will be gone from this good earth…in three days’ time…when the final leaf…falls from the kaku tree…baby and I…will take our final journey.”

Daizo looked out the bedroom window with tears blinding his vision. He saw what Emi saw each hour of every day when he so carefully turned her head. It was nearly winter and the kaku tree was now bare save for three lone leaves. He closed the curtain after he turned Emi’s head away from viewing.

For the first time in weeks, Daizo left the house. The maidservant took his place at Emi’s bedside.

Daizo walked the grounds and thought about Emi’s declaration. He prayed on her words and he prayed for her soul. He knew about yin-yang and he knew his wife needed balance and harmony to sustain her young life.

He saw a ladder leaning against a shed on the outskirts of the forest. He had an idea. A plan hatched. He quickly took the needed steps to see it to completion.

The next morning while tending to his wife, he turned her head to the bedroom window which framed the kaku tree. Together they watched a leaf fall to the ground with now only two leaves remaining. A sad sigh escaped from Emi’s lips.

The morning following, Daizo went through the same procedure. He turned Emi’s head to the bedroom window and again they both caught sight of the second falling leaf. And yet again, Emi sighed.

On the third day of the three final leaves with only the one single leaf remaining, Daizo turned a quivering Emi to face the window framing the familiar kaku tree. The wind blew, the leaf remained. This day Emi’s sigh was one of relief. “Spared to live another day.” She thought.

On the fourth day with Emi’s head turned to her bedroom window she stared in surprise as the leaf stayed strong attached to the branch in no danger of falling no matter how brisk the winds.

Day after miraculous day, Emi stared out the window and greeted her leaf – lifeline to hope. As the leaf clung to the branch, so did Emi and the baby cling to life. It wasn’t long before strength came back to the now hopeful young woman.

One fine morning, with sun shining through the bedroom window and a bare tree save for one bold kaku leaf as background, Emi felt the pangs of impending motherhood pierce her now healthy body. The baby was coming, her mind was calm, and Emi’s spirit was bursting with hope and joyful expectation. Her yin-yang was in balance and baby Kiko came into the world.

Months later when winter turned to spring and the days were longer and the air warm, Daizo and Emi were taking a walk with baby Kiku in her carriage. They took a path that led to the outskirts of the forest, where a ladder stood leaning against a shed. To the left of the ladder was a bucket once filled with glue now full of hope.