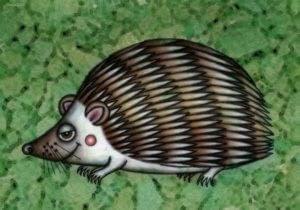 Once upon a time, in a world where the animals ruled the earth, there lived an armadillo. Our little armadillo had a tough leathery shell on his exterior. But his interior was soft and sensitive with a heart for music, of all things.

After some time passed, the lily pads went silent and the croaking frogs went back to their frog business of catching flies, mosquitoes, moths and dragonflies for their supper. With the concert over the little armadillo trudged on to the meadow where the crickets lived.

Our little friend slowly continued his journey until he got to the forest. Here amongst the trees, flora, and fauna was an orchestra composed of fine feathered songbirds of many species. There were nightingales, finch, thrush, and sparrows. There was even a vociferous cockatoo and a cuckoo bird who joyfully repeats his namesake note.

But the star of the show was the canary section. These little warblers were a marvel in song. Their voices unraveled like silk. They hit the high notes while the low notes rose to meet them. The tunes were playful and majestic all at the same time. The voices of the canary birds sounded like angels singing to the little armadillo. And that was when the idea hatched.

“I will pray to God for the voice of an angel and I will join Earth’s magnificent choir!”

The armadillo began his petition immediately. “Please God, let me make music. Give me voice to match my heart and I will sing Your praise as lovely as the birds, as sincerely as the crickets, as proudly as the frogs.”

God spoke. “Dear little armadillo, I made you as you are to protect you. Your hard shell keeps you safe from predators and allows you to visit my marshes, my meadows and my forests without fear. Enjoy the songs of others and forget this crazy notion to make your own music.”

The armadillo was unswayed and began to bargain with God. “I will do anything to be a participant in the melody of Your creation. I will give up my hard shell to have even one minute of beautiful sound to come from me.”

God replied, “Child, if you gave up your shell, you would not survive for the one minute you are requesting.”

The armadillo was firm and God was so moved, but with a little something more than He originally planned.

The little armadillo shed its shell and was instantly gobbled up by a vulture who swooped down to claim the tasty defenseless mammal.

The hard shell lay on the forest floor with a twig beside it, and God’s new plan took hold.

There became an angel navigating the heavens and visiting the earth below. This angel not only had a singing voice pure and sweet, he played a drum, made of a familiar leathery hide. And with every drumbeat forever more there is the spirit of the little armadillo angel who loves music and praises God with song and drum.