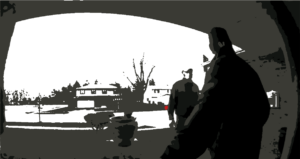 My oldest brother was always in trouble. I’m not talking about cat torturing, teacher threatening, out-of-control, out-of-his mind trouble, Casey was known for getting into “boys-will-be-boys” trouble.

I got a phone call on Tuesday from my dad and he told me to come right over. It was surprising because (a) it was a call – not a text (b) the coronavirus is raging, and we are all sheltering in our own homes (c) my dad didn’t sound like my dad, there was something in his voice I didn’t recognize.

When I got there, my parents were sitting very close together on the living couch. A Kleenex box was on the side table, and a small waste basket from the front hall powder room was filled with used tissue.

Something major was going on. No one ever sat in the living room, and my mom would never permit a garbage can to be moved from one place to another, upsetting the decor.

My middle brother Mike was there with his wife, Marcy. Noticeably missing was my niece and nephews. Mike and Marcy never show up to my parents’ house, or anywhere, for that matter, without their kids.

James is my younger brother, and he was there too that day. Everyone was somber. Apparently, I was the last to know.

I looked around and said, “Where did he go to?”

He was killed in an attempted robbery. Casey was the intruder.

He and another man both wore black hoodies, rubber gloves, hospital face masks, and each carried identical blue jumbo-sized shopping bags from IKEA.

It was 2:07 pm on a sunny spring Tuesday in Ohio. They walked up the front sidewalk to a 1980’s era two-story house in the West Heights subdivision of suburban Glenwood.

The other guy rang the doorbell. It was one of those bells with a built-in security camera you see advertised everywhere. It comes with an app for your phone, so you can screen guests, know what time your Amazon delivery came, and see your packages on the front step.

My brother’s friend stared right into the camera. Later, when the video was released, I could hear Casey calling him a “dumbshit” and shouting to get away from the camera. It became a popular meme. To me, Casey sounded nervous.

The landscapers were there at that time, doing the seasonal spring clean up. When the doorbell rang, the homeowner thought it was a couple of the workers with a question about the yard.

The homeowner was a big guy, much bigger than my 5’9, 160 lb brother. He was also much younger than Casey, who was days away from turning 60.

Casey pushed his way into the house with his accomplice following behind him.

Meanwhile, the wife grabbed the two young kids who were playing in the living room and ran to the upstairs bedroom, where Casey followed and held them hostage at gunpoint.

No one in our family could imagine Casey even holding a gun, yet alone being prepared to use it.

The husband chased the doorbell ringer out the front door, kicking the shit out of him on the step until he very quickly ran away. Then the homeowner ran back in the house, climbed the stairs, grabbed his wife’s gun from the master bedroom, and approached Casey from behind.

Casey whirled around. The husband shot my brother in the stomach, just as the police were coming up the stairs.

Casey was dead on arrival at South Shore hospital, the very same emergency room where three times he took his then-wife, to give birth to their three children. They’re all grown now with kids of their own, also born at South Shore.

Everyone in our immediate and extended family stayed close, that’s the kind of family we are: stable. Or so we thought.

The robbery gone bad was so unlikely and so stupid that the doorbell video went viral with over 20 million views.

The stupidity doesn’t stop there. When the police caught the other guy, the explanation for why they would attempt armed robbery in broad daylight was even more ridiculous. My brother worked with a guy twenty years ago who bragged to him he had stashed shoeboxes of cash in the house. Casey told his friend he had reason to believe the money was still there all these years later.

My deceased brother was the laughingstock of the internet. Nearly every news station big and small covered it.

We were all bombarded with inquiries from the press, and shlock television shows tried to get us to talk about our dearly departed.

The media excitement for the story hung on for only two long days, but our grief doesn’t give up so easily.

Casey was the older brother we looked up to. He was the adored son who could make my mother laugh when he would give her his phony puppy dog eyes. Casey was father and papa to children and grandchildren who loved and respected him.

What went wrong? How did we not see his desperation?

The only explanation we could come up with is Casey had to be desperate. Though we knew of no addiction, gambling debts, or threats to his life, his actions were that of a very desperate man.

The burial was private, of course. No chapel service, no visitation. Just fifteen of us Meinhardts, violating shelter-in-place restrictions, mourning together.

And right there in my parent’s living room, under the worst possible circumstances imaginable, my little niece Elly, Casey’s granddaughter and pride and joy started singing. Elly is five. Even her parents didn’t know she could carry a tune. From the open lips of this little angel came the chorus from Leonard Cohen’s Hallelujah.

It was a heaven-sent reminder to give praise to God. No matter what. No matter how. Fifteen voices joined together and honored my brother’s memory by singing Hallelujah together.

No one is making excuses for Casey. We’re still not over the shock and outrage, the guilt and anger. We are the ones left with the shame of what our brother did. We have to learn how to hold our heads up high when those around us start to whisper. We have to teach our children forgiveness. We have to live in grace with gratitude to God, who had plans for Casey that we will never understand.

The family, traumatized by an intruder with a gun. The accomplice, sitting in a jail cell. The rest of us who loved Casey, left behind and bewildered. We are all more than some joke to be watched on YouTube. We live on, and it’s up to us to rise above tragedy and say Hallelujah! Praise God’s holy name.