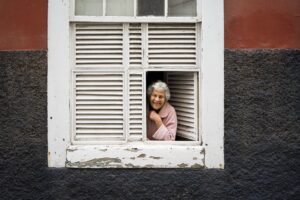 Pauline lost the last drop of her eyesight in August. Glaucoma had been eating it up for years while she diligently fed her eyes Cambigan and Roklatan, medicine to stabilize her pressure and prolong the inevitable blindness.

“Well, Ma, it’s time to put you out to pasture.” Her daughter joked.

“Moo.” The mother replied with a wink of her useless right eye.

They laughed and then got down to the business of making plans for what’s next.

That’s what Pauline and Linda do. Mother and daughter have always been a “make the best of it” team.

When Joe Rosen died from a heart attack on his 70th birthday, Pauline called Linda from the hospital lobby’s payphone. Linda then called the funeral home before she even left the house to pick up her mom.

The two talked about the logistics of the chapel service, burial, and shiva arrangements in the car on the way back home. Once that was settled, mother and daughter sat down on the couch and spilled the sorrow of a lifetime.

Now, twenty-three years later, a ninety-two-year-old Pauline knew it was time to give up the house she lived in for the last sixty-plus years.

Pauline and Linda walked hand-in-hand through the front door of the Breakstone. Debbie, the marketing director, greeted them.  “We’ll sit and chat in my office. I’ll get a little history from you, tell you about Breakstone, and answer your questions. Then, if you’re still interested, lunch and a tour.”

Pauline signed the papers and was home by 3:30, just in time for Jeopardy.

Pauline’s new apartment was ready the following week. The ladies wasted no time in deciding what went with and what stayed. Linda would put the house up for sale later, once they knew for sure that Pauline was happy at Breakstone. Even decisive people leave room for what-ifs.

“I love it!” She said, even before she walked through the door of her new home.

Debbie, who was escorting her newest resident, said, “How do you know you love it? You’re visually impaired, and you’re still standing in the hallway?”

Pauline replied kindly, “My dear, happiness is a choice. I made up my mind to love this new apartment, and I instructed my heart to follow suit.”

“That’s how we roll,” Linda added.

Mother and daughter went inside and sat on the same couch where they had their mourning cry so long ago for Joe.

This time though, they laughed. Uncontrollably. They laughed until their stomachs hurt.

“Ma, you’re such a bull-shitter. The look on Debbie’s face when you turned on the blind old lady schtick!”

“I did sound rather convincing – didn’t I?” Pauline managed in between chuckles.

But the really funny thing is; Pauline was telling the truth about believing happiness to be a choice. The real schtick was between mother and daughter, who always enjoyed a good laugh together.

Never underestimate the wit and good humor of a little old lady who will do what it takes to make the best of a difficult situation.

By Susan Diamond
READ MORE by this author

-About this Story-
The characters of Pauline and Linda are inspired by my Mom and me – two characters! We joke, make plans, and have fun together. As I write this, my mother is turning ninety-two, with only one good eye and one darn good attitude of accepting the indignities of growing old.
– Susan