Story: The Rest of the Week 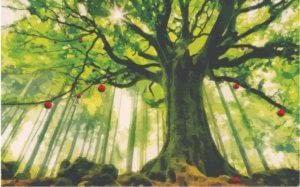 What a week! It started out busy and only got busier.

It was the first day and God was making the heavens and the earth. It was a complicated process, not as magical has you may have been led to believe. There’s no short-cuts and no substitute for hard work. At one crucial point in the multi-step process God said, “There will be light!” And brightness rose slowly throughout the unfinished earth and it was good, so good. Then the divine architect tweaked the light by adding darkness and separated the two. “I will call the light ‘Day’ and I’ll call the darkness ‘Night'” And so there was a morning and there was an evening. God looked at his finished creations and was very pleased.

He had an idea and He called it Sky. God gave Sky something to do, Sky’s purpose is to divide the waters from above and below. It’s a tricky bit of engineering and it took all of the morning and all of the evening to get it right. Finally God looked at it and said, “It is good.” Sky was able to join the other two completed creations; Day and Night.

At this point the unfinished earth was exhausted. She patiently waited for a little help with all the H20 swooshing around her. God saw her heavy burden and said “Let dry land appear!” With the dry land supporting the water, God decided dry land should get the name of Earth, and water could be called the Seas. And that’s not all – God had a gift for Earth. He gave her plants and trees, all with their own seeds and unique fruits. Oh how clever! God was again very pleased. Now Sky, Day, and Night, welcomed Earth and Seas to God’s growing family.

God was noodling the whole light-Day relationship. Light was capable of so much more. He wanted light to mark the seasons, and the years. Day could still be Day, but with a stroke of genius, God thought to give Day the Sun and complemented it nicely by giving Night the Moon. Plus, in a beautiful gesture, He gave the Night stars, which he placed in the heavens to shine upon Earth. It was good. Sky, Day, Night, Earth, Seas, surrounded the Sun, Moon, and Stars with love and affection and thanked God.

God was creating so much good in the new world! So much joy, such delight! And God said, “Let the Sea be filled with swimming and staid fish, plants that sway and mammals who live in and out of water, let the Sky be a home for glorious flying birds.” And so it was, and it was a glorious sight. As God looked down to the Seas and up in the Sky He blessed all the creatures and told them to increase and be many. Imagine how large this happy family of God became; Sky, Day, Night, Earth, Seas, Sun, Moon, Stars, Living Creatures for Sky and Seas!

He was on a roll. “Let all sorts of Living Creatures come forth upon the Earth, with stampeding hoofs, crawling critters, and ferocious beasts, who all shall live on the ground. And too, there will be humankind, made in my image. One male, one female.” It was a tall order soon filled by the decree of the Almighty. God was sure that Man and Woman would have His holy attributes, and He chose them to rule wisely over the other Living Creatures. Some of these Living Creatures to the Earth would be sustenance to Humankind, nourishing them and being nourished by them. With a flourish God wound up the day with a perfect ending: a command for Man and Woman to bear children, to create future generations of humankind in His image. The family of God was complete and it was awesome. Sky, Day, Night, Earth, Seas, Sun, Moon, Stars, Living Creatures, and Humankind.

Light called a family meeting. Everyone was there. Father God has been working His holy fingers to the bone these past six days. His children were worried. How could they persuade God to take it easy? What could they say or do to remind Him he needed His rest? One tiny winged bird was determined to make herself heard to the entire world of creation. She began a song so sweet that all, even the fiercest beast, leaned forward to hear her melody.

With God present, she explained: “When I needed to make a nest, I gathered tiny twigs, and tied them together. I wound the lengthening strands around and around until I had an open basket to live in. But in my excitement, I kept going, higher and faster. My tired wings begged me to stop, but I refused to listen. I wound and wound so high and so tall that my once useful nest became useless. I wrecked a once beautiful thing and learned that more is not better.”

God got the point. Instead of working that day, He blessed it instead. That’s why the seventh day is holy. And that’s why you should rest and spend time in holy activities like prayer, praise and love.